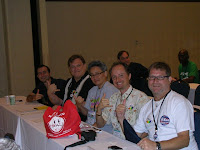 Below is a report on Pride At Work's recent national convention.  Five P@W Hawai'i members attended (from HGEA, Local 5, HSTA, USW, Musicians), with chapter president Steve Dinion participating in panel discussions on chapter organizing and creative actions.  Mahalo to HGEA and Local 5, each of whom sponsored their member, and to our organizational supporters (Hawai'i State AFL-CIO, HSTA, UHPA, Machinists 1998, Local 5, HGEA, ILWU 142, and USW 12-591) for their support. 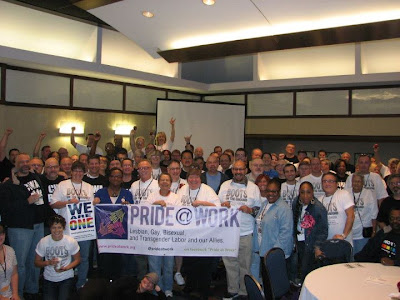 Approximately 200 activists attended the convention, more than three times as many who attended the previous national Pride at Work Convention, held in Pittsburgh in 2009. Delegates came from 26 states and Ontario, representing 18 unions from both of the national labor federations, the AFL-CIO and Change to Win. Leaders of other union coalition organizations also addressed the convention, including Terry Melvin, President of the Coalition of Black Trade Unionists (CBTU); Gregory Cendana, Executive Director of the Asian Pacific American Labor Alliance (APALA); Clayola Brown, President of the A. Philip Randolph Institute (APRI); and Karen See, President of the Coalition of Labor Union Women (CLUW).

The convention passed resolutions supporting the efforts of striking Chicago teachers and the boycott of Hyatt hotels, where housekeepers and other hotel workers face dangerous workloads and risk replacement by low-paid temporary workers. Delegates voted to support annual participation in the Transgender Day of Remembrance and to expand efforts "to achieve full respect, dignity and justice for transgender and nonconforming workers," including outreach activities, skills trainings and mentoring efforts. Additional resolutions called for support of organizing for racial justice, mobilizing young workers, and increasing efforts to combat the spread of HIV/AIDS.

Delegates voted to increase support for union-made products and union services; to develop new programs to increase support for LGBT workers internationally; and rally for passage of pay-check fairness legislation and for passage of the DREAM Act. They called for unions throughout the country to push for LGBT inclusive union contracts and transgender-inclusive health care. They called for a National Day of Action on Feb. 1, 2013, in support of transgender-inclusive health care.

The delegates passed other resolutions addressing abuses by companies such as T-Mobile and American Airlines which market to the LGBT community while undermining the rights of LGBT and other workers. They called on American Airlines to recognize the right of service agents to organize and urged LGBT organizations receiving funding from the company to join a broad campaign recognizing the fundamental and legal rights of employees to vote on union representation.

The convention called on T-Mobile and its parent company Deutsche Telekom to give their American workforce the same organizing rights enjoyed by the company's workers in other regions of the world. They called on the company to stop marketing to the LGBT community in the U.S. while simultaneously seeking to prevent their LGBT employees from securing recognition and rights through collective bargaining agreements.

In addition to convention business, delegates participated in a "Boots on the Ground" voter registration drive in the Cleveland area on the final day of their meeting. Masen Davis from Transgender Law Center and Augusta Thomas from AFGE received special honors at a Celebrating Solidarity dinner held during the convention. 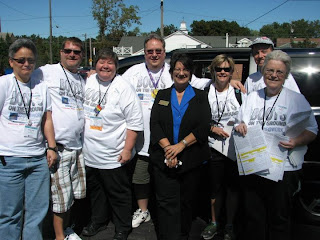 "We are at a critical juncture for our labor movement as well as the LGBT movement," noted Larson. "The enemies of organizing don't care if you are gay or straight, transgender or bisexual or what color your skin is or your faith, they are out to see that workers lose their voice and it is up to us to fight back."

"Pride at Work is the voice in the LGBT community explaining how stronger and better off our community is by growing the labor movement and focusing on organizing members of our community," said Pelletier.

Both newly elected co-presidents credited the out-going leadership team of Donna Cartwright and Stan Kino for helping develop Pride at Work into one of the premier LGBT organizations in this country. They committed themselves to expanding the efforts to build the organization's chapters around the country and to providing a strong voice in the labor movement for the LGBT community.
Posted by Pride at Work Hawai'i 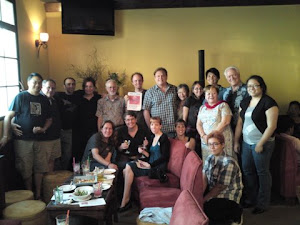